â€œThe candle is not lit
To give light, but to testify to the night.â€

In one way or another, leaders are always receiving feedback. Sometimes it is from the voiced reactions of people at a meeting they are guiding. Sometimes it is more formal, for example from a staff survey or 360 degree appraisal process. As a consultant and coach, I’ve noticed a fairly common pattern in the process of taking in, understanding and using feedback, particularly when it is uncomfortable to hear.

There are stages to the process of personal learning, ones I’ve worked to clarify in the graphic below — ones I’ve noticed in others and in myself. 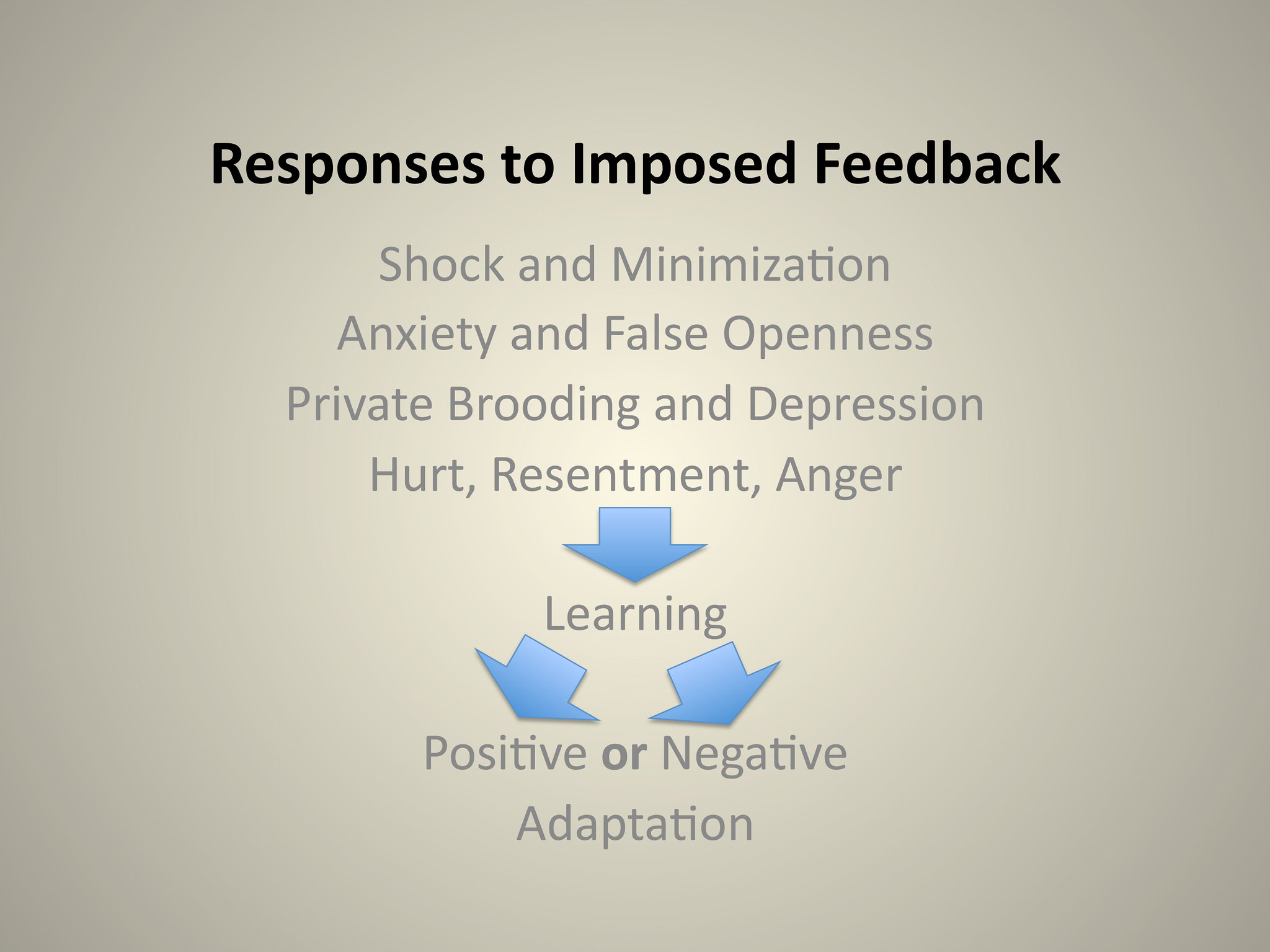 1. Shock and Minimization. At the first stage, the leader knows or senses that feedback is coming but has not as yet received it. Employees have filled out their anonymous survey forms and some consulting firm promises it is completing a “comprehensive report” that will soon be on the way. Or perhaps the leader has made an important recommendation to the Board, and so is acutely aware of every question, challenge, and tone of communication from Board members during the event, but has not yet heard the actual outcome and feedback from the presentation. Whether the forthcoming feedback is formal or informal, the leader knows that there will be some type of judgment. At this stage, before the information is received the leader may enter a period of mild shock, unconsciously minimizing or dismissing the impact feedback will have. As the shock wears off, the second stage begins with worry about the potential negativity of the feedback.

2. Anxiety and False Openness. Then it happens — the feedback comes in containing uncomfortable truths or perceptions. The comprehensive report says the leader needs to enhance personal relationship and trust-building skills, recommending work on emotional intelligence. Or key stakeholders, such as Board members share how the leader’s presentation rambled and was unclear. These leaders may then acknowledge the problem with a kind of false openness, claiming, perhaps to have never heard such negative feedback before or claiming to have heard it but never to have understood it, or even claiming to “be working on it” and “much better than I used to be.” The person may even more or less cheerfully agree with the assessment and say things like, “Well, that wasn’t so bad after all! Not as bad as I expected!” or some such other coverup. These are defenses, of course, aiming to protect the person’s image and sense of self-identity, although vocalizing such rationalizations too long and loud ends up doing just the opposite.

3. Private Brooding and Depression. What may not be so plain in these rationalizations and defenses is the pain the person is feeling and actively attempting to process in a private way. Behind the scenes, the leader may go home to brood and rethink the meeting, the survey, the presentation, team dynamics, anything and everything related to the feedback and personal performance. This can include wondering if he or she should stay in the job and organization and is often accompanied by a depression that seems more or less uncontrollable.

4. Hurt, Resentment, Anger. Ultimately, the impact of the feedback, and the pain it has caused, moves toward deeper, more honest feelings: hurt, resentment and anger. If employees were fearful of speaking up in the first place and worrying about retaliation, this stage definitely is the zone of risk. Just about the time people are beginning to feel they are safe after giving feedback, the leader’s mood can change. If several supervisors in the hierarchy have received negative feedback, this is the point where they may bond together, start seeing the whole process as unfair, begin blaming those who offered the feedback and demonizing them.

And here, after the fourth stage there is a break point, one I believe we must look at closely, because it has so much to do with whether a person will ultimately find something positive or negative in the experience the feedback provides. It’s here that the leader will become stuck or achieve a breakthrough. The direction one goes has a lot to do with previous conditioning of the leader, the way the leader feels he or she has been treated over time, the childhood of the person and conflicts survived, but also later experiences in school and work and social relationships generally. None of us is perfect. The point is all of us have wounds from our pasts, and when the feedback begins to touch those wounds, the pain may be amplified far beyond the actual character or content of the feedback. If a leader, for instance, because of previous experience questions his or her value as a person or whether he or she has a meaningful role to play, then the pain can go very deep into the heart, touching all the damage that is there.

5. Learning. At the fifth stage the person in some way must come back together. He or she must integrate the feedback experience somehow, even if that means throwing out the feedback entirely. If the leader is unaware and wants to hide from personal wounds, he or she can do so by dismissing the survey or blaming the organization (or the coach), finding flaws in the process, or imagining ulterior motives. “Well, the Board is so political. Of course, they couldn’t accept my proposal. It was too threatening to them!” This is the limited learning then: limited to finding a reason for the blow that has nothing to do with the person and his or her way of being.

On the other hand, at this critical choice point, the leader who realizes that the pain of the feedback is is magnified because it touches old wounds has a chance to learn at a different level and in an unlimited way. “Ah, the feedback reminds me once again of how hurt and scared I was when I was fired two years ago.” Or, “this feedback is again pointing to how I’ve failed to trust myself in too many risky situations.” Or, “the feedback takes me back to an early time when I felt so terribly isolated and alone while others succeeded around me.” It’s when the leader allows, even positively invites the feedback in relation to the wounds of the past that he or she becomes strong again, strong enough to separate what’s here and now from those old, unresolved inner issues which are “speaking up” through the feedback. It is at that moment and in that way that the positive learning can occur.

6. Positive or Negative Adaptation. Depending on the kind of learning — learning how to wall out the pain or learning how to put the pain in perspective — different adaptions, negative and positive arise. And there is a surprising subtlety to the difference. The person who walls out the personal wound is the one who ends up controlled by it, condemned to a cycle of re-wounding and learned coverups. The person who lets the information in, acknowledging and accepting how it touches a particularly personal and vulnerable space in the heart is the one who ultimately can be free.

In this sense, our wounds are likely never totally healed. It would be unwise to hope for that, but much of their energy can be redeemed and even transmuted. That, I think, is where the real wisdom lies anyway — and where the action and changes that come out of constructive feedback are found, action and changes that are neither too much or too little, that are gentle improvements, made one at a time, one suture after another. 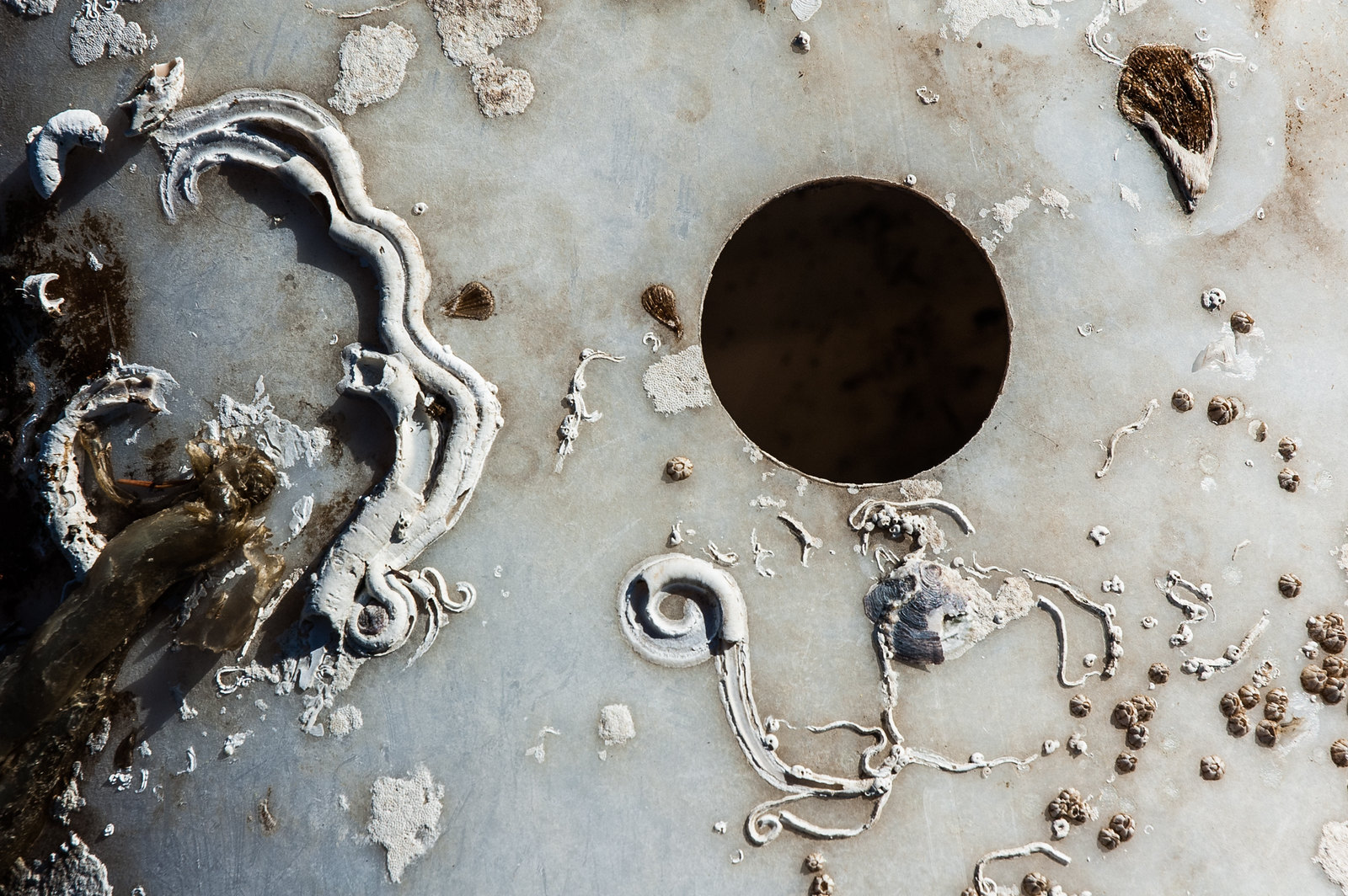 Plastic Barrel with Hole Washed Up from the Sea